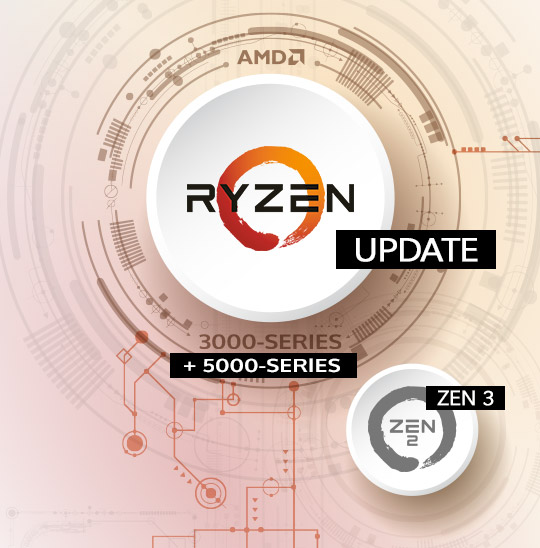 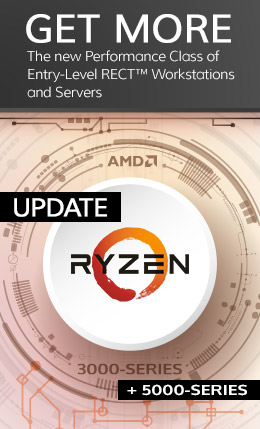 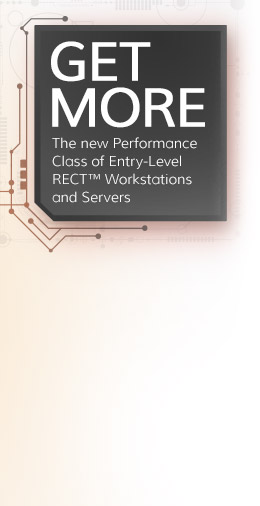 With the Ryzen™ 5000 series and the new X570 chipsets, AMD provides an outstanding platform for new entry-level RECT™ workstations and servers. It is a huge statement from AMD: more cores, more cycles, faster memory. At the same time, AMD is the first mover for the new PCIe 4.0 standard, which delivers double the transfer rates for e.g. NVMe SSDs. And because AMD really wants to impress as challenger, it is packaging all this performance at an unbeatable price level.

We bundle this for you in our RECT™ workstations and servers with AMD Ryzen™ 5000 series CPUs so that you can benefit from superior computer systems at an unbeatable price. 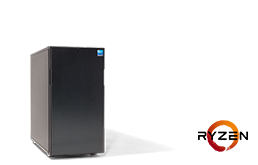 even more scope in rack 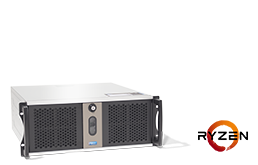 Entry level in the fast lane
It is an accepted fact that the latest Ryzen™ processors are among the most advanced desktop CPUs. Thanks to AMD’s “Zen 3 architecture and 7nm lithography, 3rd-generation Ryzen™ processors now achieve such compelling values, particularly with multi-thread performance, that these tiny powerpacks can deliver even in the entry-level and small entry server segment. Basic clocking is up to 3.9 GHz (3800X), while Precision Boost Overdrive can automatically push processor speed all the way up to 4.7 GHz (3950X). The Ryzen™ 5000 series processors clearly match the performance of the i5/i7/i9 series from Intel.
But it’s in the area of cores and threads that AMD really comes into its own, because it’s here that they are on average cheaper and more numerous: the top-of-the-range 3950X provides up to 32 threads, with the smaller 3600X offering 12 threads and overtaking the i7-9700K – which is clocked slower anyway.
And when it comes to processor cache, it's worth taking a look at the inexpensive Ryzen servers: at a low price they offer 16 MB in L3, which is something otherwise reserved for Intel’s Coffee Lake top-of-the-range models with 14nm lithography. And this is not the end of the story by far, as the Ryzen™ 3600 provides 32 MB of L3 cache, while the 3900X offers a whopping 64 MB.
When it comes to RAM, you can choose between ECC memory with up to 2666 MHz (e.g. in the RS-8625R8) and non-ECC with particularly fast 3200 MHz (e.g. in the RS-8625C-T). 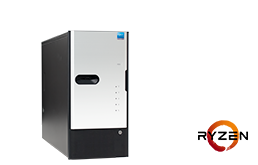 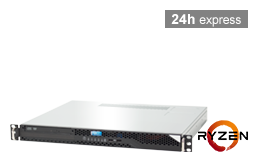 AMD Ryzen™ CPUs of the 5th generation in our RECT 1U-"Shorty": 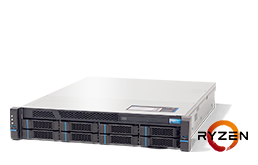 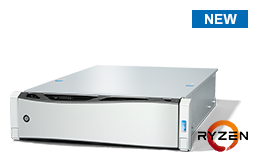 Security: hardened at the core

AMD traditionally goes its own way with the management of translation lookaside buffers (TLBs), meaning there is natural protection from side-channel attacks like Foreshadow and Zombieload. What is more, a new hardware-based security system has been implemented to lock out all those exploits experienced in recent times that could also have impacted AMD processors (for example Spectre v4).

Security: hardened at the core

AMD traditionally goes its own way with the management of translation lookaside buffers (TLBs), meaning there is natural protection from side-channel attacks like Foreshadow and Zombieload. What is more, a new hardware-based security system has been implemented to lock out all those exploits experienced in recent times that could also have impacted AMD processors (for example Spectre v4). 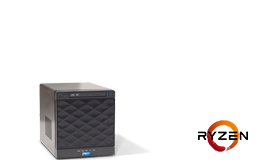 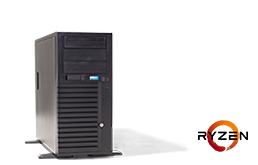 Ideal for price-sensitive and simple as well as small server environments in order to achieve well-clocked IT performance within small budget limitations. RECT small entry servers with AMD Ryzen 5000 processors offer a low budget platform focusing on the area of computing power for small businesses and offices as well as branch offices. 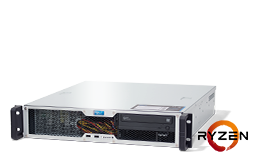 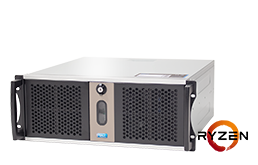 The Ryzen™ 5000 processors, developed under the codename Matisse, feature advanced ZEN 3 architecture on board. They thus share the basic design with the EPYC CPUs of their generation and prove that 7nm production technology is continuing its inexorable path to becoming the new industry standard. Furthermore, AMD's chiplet approach – i.e. separating the CPU dies from the I/O dies – promises greater power and success. A Ryzen™ 5000 consists of a compute chiplet (CCD) with up to eight cores (3900X: two CCDs) and an I/O chiplet for security and communications. The resulting independence in processing ensures that each particular area can run at its own speed without being able to restrict the other areas.

The latest server and computer trends in the RECT™ shop

Welcome to the RECT Shop

This store is aimed at companies, tradespeople, merchants and public institutions. All prices mentioned are exclusive of VAT and shipping.

We use cookies on this website. Some are necessary to enable features and personalize content for you, others help us improve this site and your experience.

Necessary cookies enable the basic functions, they are necessary for the proper functioning of the website. This includes, for example, the order processing as well as the protected customer area.

These cookies enable us to continually develop our website for you by recording the number of visitors as well as the actual usage behavior - anonymously and pseudonymously, of course. This is done both by us and by partners (third party providers) in pseudonymised form.

This includes advertising cookies that are used to display relevant advertising that is tailored to your interests by means of a pseudonymized interest profile. This is not only done on our Internet pages, but also on the websites of other advertising partners.